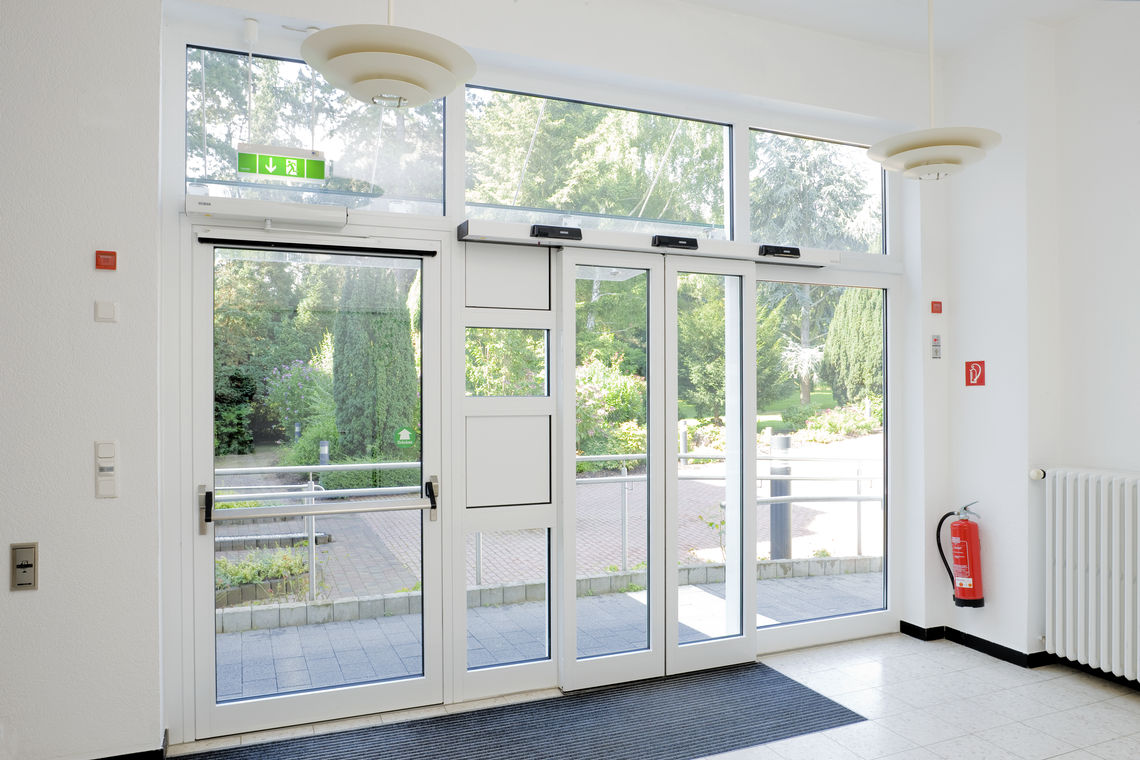 The safe path away from danger

Always open but safely closed - the demands on escape and rescue routes are extensive, and initially seem contradictory. They need to save lives in the event of danger, and prevent access by unauthorised persons on an everyday basis. Intelligent emergency exit system solutions are the perfect solution for this apparent contradiction.

Frequent flyers know it off by heart. Before each flight, the cabin crew point out the two light strips on the floor of the cabin which indicate the route to the emergency exits. Conversely, escape and rescue plans in buildings require an active approach.

We usually feel safe in a building. A sudden unforeseen event such as a loud bang in a shopping centre, takes virtually everyone by surprise, resulting in uncontrolled mass panic. It is precisely such sudden events that present a particular risk to our safety. A safe place very quickly becomes a life-threatening area that needs to be evacuated as quickly as possible.

Flight as a human reaction to acute danger

People react to danger in many different ways. Very few remain quiet and composed; most descend into panic and act irrationally. But generally speaking, we all have one thing in common: the urge to get away from the dangerous situation. The natural reaction to this is to flee.

Faces with an acute danger in a building, the people caught up in it are confronted with structural and spatial realities: walls, stairs and fixings suddenly become obstacles which make quickly leaving the building more difficult. People in a state of fear or panic may also lose their sense of direction and so increase the risk to their lives.

Emergency exits open at the push of a button. © Jürgen Pollak / GEZE GmbH

Escape and rescue routes can save lives in dangerous situations. In a hazardous situation, clearly identified traffic routes lead people out of the building or into a secured area as quickly as possible via emergency exits or panic doors. At the same time, they allow the fire service or an emergency doctor to take quick rescue action from outside.

According to the Technical Rules for Workplaces, an escape and rescue route guarantees safety only when specific guidelines are taken into account.

Guidelines for escape and rescue routes

Doors must meet various demands in accordance with the intended use. These can be optimally combined by using different system components, however, whereby early planning for the intended use plays an important.

For escape and rescue routes, the most important challenge is to allow people to flee the building quickly and safely. When there is no danger present, however, the doors must remain closed and be protected against unauthorised access. In particular, it is important for the building operator to protect the facilities against sabotage, burglary, theft or misuse. 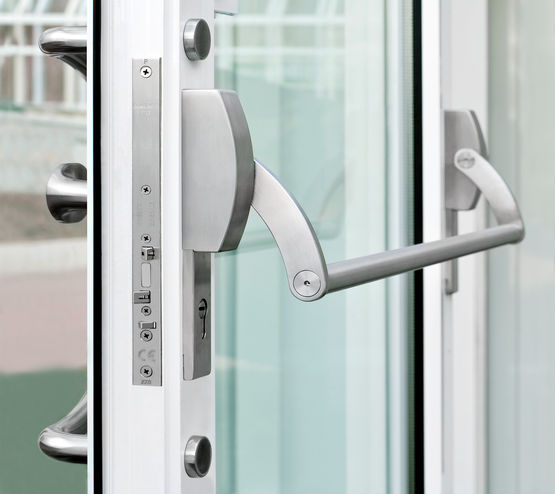 Emergency exits are a significant part of escape and rescue routes. The layout and number of emergency exits depends on the building and the respective building regulations. Despite this, it is clear that emergency exits allow people to evacuate the hazardous area at any time. Being able to open doors quickly and simply without any external aids is critical. Emergency exits must open immediately in the direction of flight and must lead people in danger outside, or into protected areas.

According to new European standards, emergency exits can be equipped with a variety of emergency exit locks. The optimal selection of emergency exit locks depends on how many people need to flee in an emergency. If there is a risk of mass panic, panic exit devices should be built into the doors in accordance with DIN EN 1125. These consist of a horizontal bar combined with a panic lock, and. may use mechanical, electro-mechanical or motor panic locks. In public buildings in particular, visitors are not familiar with the local escape routes and functions of the emergency exits. If they press against the door leaf in the direction of flight, panic exit devices allow the door to open in less than a few seconds, without any instructions required.

If the number of people in the building is manageable, and they are familiar with the escape routes, emergency exit devices according to DIN EN 179 are usually sufficient. For example, the horizontal bar can be replaced by a door handle since there is no chance of panic.

Emergency exits are very often used in fire protection sections. The safe flight function is just as important as the self-closing and fire-proof properties of the door installation. If automated doors need to provide complex functions in escape and rescue routes, a system solution from a door control unit offers an electronic locking element, such as for example emergency exit locks or emergency exit electric strikes and a panic lock (also called anti-panic locks). This guarantees both protection against unauthorised access on the one hand, and free access for fleeing people in the event of a hazard on the other hand.

Doors are one of the most important components in the safety design of a building. 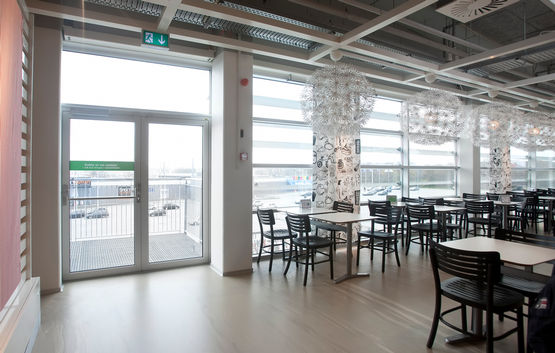 The door control unit, as the “brain” of an escape route control system, assures and monitors the opening and closing procedures in escape routes. The self-locking panic lock guarantees quick opening in an emergency, while the door control unit controls access. Activated by a fire alarm system, or in the event of a power failure, it automatically locks if a motor lock is used. In the direction of flight, the door can still be passed through since the emergency exit closure is automatically unlocked in the event of a fire alarm or power failure. The door also opens via the emergency button if several people push against it in a panic situation. The door can be opened from the outside using a key at any time, however If a self-locking panic lock is used, this ensures an insurance-compliant guarantee of protection against burglary in the opposite direction to the direction of flight.

The demands on safety and security components are almost as varied and individual as each specific building. Certain additional specific demands also need to be met. GEZE safety solutions are able to guarantee safe escape and rescue routes in any building. If the escape and rescue routes should not be open to everyone in normal operation, GEZE access control systems - which are connected to door control units - can take over the necessary monitoring. Whether at airports, in hospitals or at conference centres: the multifunctional products supplied by GEZE are like cog wheels which engage neatly into one another, producing an emergency exit system that not only provides optimal protection in an emergency and convenience during normal operation, but one that can be planned and installed reliably.

Good to know: The GEZE RWS solution is certified according the German standard EltVTR. From the technical point of view we will reach the EN 13637. At the moment an independent institute is testing the system to provide us the certification according to EN 13637.

Escape route protection in the Vector headquarters in Stuttgart

The new company headquarters of Stuttgart-based IT specialists Vector Informatik is the largest building in the company complex so far. The company opted for safe escape and rescue routes with intelligent technology by GEZE. Learn more here!

You can find GEZE brochures on the topic of emergency exit protection available for download as a PDF here. 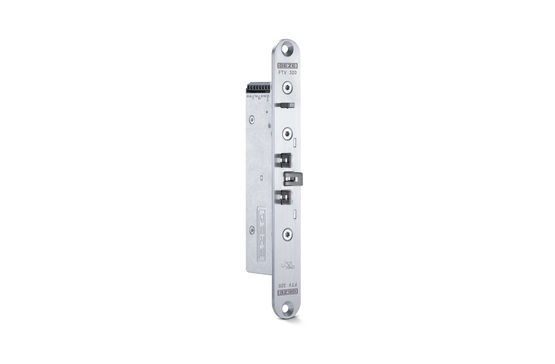 The key challenge in emergency exit protection is how to optimally combine the contradictory demands of normal operation and emergencies. To create an escape route that doesn’t equally serve a getaway for thieves, for example, it must be locked to unauthorised persons. This is particularly relevant for department stores.

To guarantee unrestricted safety of the escape route in the event of a hazard, as a safety technology specialist GEZE offers a wide range of products and optimal system solutions. Customised solutions combine individual safety demands in one intelligent system so that escape routes are opened and closed in a coordinated way in an emergency. All GEZE components can be simply and quickly integrated into an emergency and rescue route system at any time. They meet the latest technical levels of the highest safety standards. The wide range of GEZE products and systems is also operator- and user-friendly, durable and economical. A cross-product approach and the interaction between door, window and safety technology products mean that end users and fitters can rely on sophisticated and coordinated solutions.

The operators of the buildings or rooms are responsible for keeping the escape routes well maintained and. for taking all necessary precautions to guarantee personal safety and protection of the building. To maintain the functional safety of doors in escape routes in accordance with standards, these doors require regular maintenance. The components in emergency exits must be maintained annually, either by the manufacturer or by one of his approved partners. As part of this, all of the safety and control devices of the door installation must be checked in accordance with the legal regulations. A monthly inspection by the operator is also recommended.

GEZE offers a full service from the planning of a building, installation and commissioning through to service as part of ongoing operation.

Protecting and saving lives - fire protection doors play a crucial role in the event of fire. They delay the spread of fire and create an opportunity that could help to save lives.

Smoke and heat extraction (RWA) is part of preventive fire protection, and saves lives in the event of a fire. GEZE offers RWA solutions with intelligent drives for doors, windows and skylight domes. 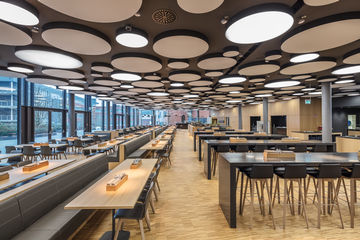